Donut Get Older. That was the theme for Neva Grace's 3rd birthday party. Gracey is little sister to one of my fans, Mila, who you may have read about in this blog.

When I learned the party theme, I made a quick trip to Pinterest - really, it was quick! There are lots of creative donut lovers out there!

This is my final project: 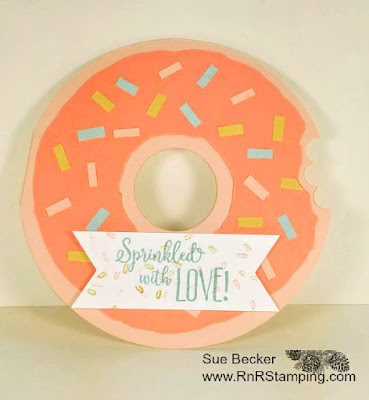 Years back, SU! had a circle die cut that would have worked for this project; I think I gave that set of dies to my sister. I dug through my stash and found a tool from early in the century that I used for scrapbooking (makes me sound kinda old...) to make the circle. You could use a plate, a lid from a container, a bowl. Look around your house for something that's 4"-ish round.

Draw the circle onto the folded cardstock. Be sure to go off of the folded edge a bit; this will create the fold for your card. Cut out your circle. The edges don't have to be perfect - it's a donut!

Using the smallest circle from the Layering Circles die set, cut the middle of the donut.

On a 4 1/4" x 4 1/4" piece of Flirty Flamingo, cut another circle, the same size as the base. Free cut this piece with a goal of wavy, uneven edges. Think dripping frosting, yum!

Cut a hole in the center of the frosting using the same small circle die. Use your snips to cut around the center, again with a goal of an imperfect cut. This is your opportunity! Imperfect cuts - woo hoo!

I used a scalloped punch for the "bite" and trimmed the frosting around it with my snips.

Layer your frosting on the donut, I used Tombow, and trim if needed.

Cut 1/8" pieces of Blushing Bride, Flirty Flamingo and Pool Party, then cut them to sprinkle size.

To adhere the sprinkles, I picked up each piece with my Take Your Pick Tool. I squeezed a bit of Tombow glue onto my Silicone Craft Sheet, dipped each spinkle into the glue and adhered it to the frosting.

The sentiment came from a retired SAB set, Hello Cupcake. The Triple Banner punch made the flags and I popped it up with dimensionals.

Best thing about this donut?? No calories!!

Have you been holding off on placing your order from the new catalog? SU! is offering a special deal in the month of July. For each $50 purchase, you will receive a $5 coupon to use in August. HINT: The holiday mini catalog premiers in August. It has lots of new products and ideas for you. 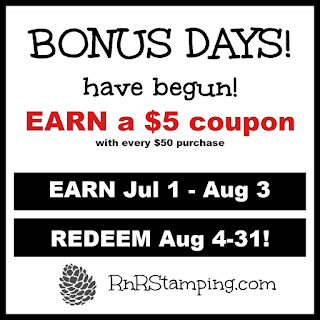 Need a catalog? Let me know. I'll pop one in the mail to you. 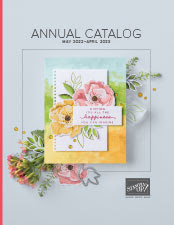 Rest and Relax with the current catty! 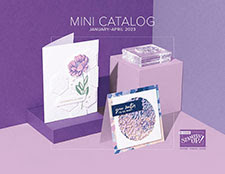 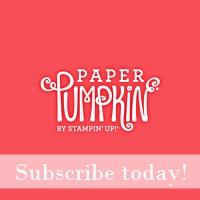 This is my Personal Blog

Sue Becker, Independent Stampin' Up!™ Demonstrator. I am responsible for it's contents, the classes, other services or non-Stampin' Up! Products I may offer here.